The vibe is: nostalgia.

“One of the things we’re trying to do is get more and more everyday people to put their home on Airbnb,” Co-founder and CEO Brian Chesky said at a press event on Tuesday in New York.

Over the years, the platform grew from its origins as a spare-bedroom side hustle — and became an entrepreneurial, sometimes illicit, opportunity to scale up and rent big. In New York, for example, a group of nine people was alleged to have built an illegal, 36-building Airbnb empire from 2015 to 2019 that brought in over $5 million in revenue.

Chesky, Joe Gebbia, and Nathan Blecharczyk famously started the platform in 2007 after hosting people on an air mattress in a San Francisco apartment to make some extra cash.

Airbnb is now 6 million listings-strong and has faced criticism for the manner in which “entire place” stays ie, when someone books a whole house or apartment instead of sharing a room or common spaces with someone living there, and listings in general, can change the character of neighborhoods and cities, potentially drive up housing prices and irk local officials on issues from parties to tax dollars to competition from hotels.

Here’s how the company hopes to bring in more everyday hosts:

What is Airbnb Setup?

“Airbnb Setup” partners newbie listers with the platform’s veterans, known as “superhosts” who guide you through setting up your listings via video call and are available via chat for semi-on-demand support. The supporting superhosts will make a “percentage of [the new host’s] earnings” covered by Airbnb, Chesky said.

New hosts can also choose to book an “experienced guest” for their first stay. 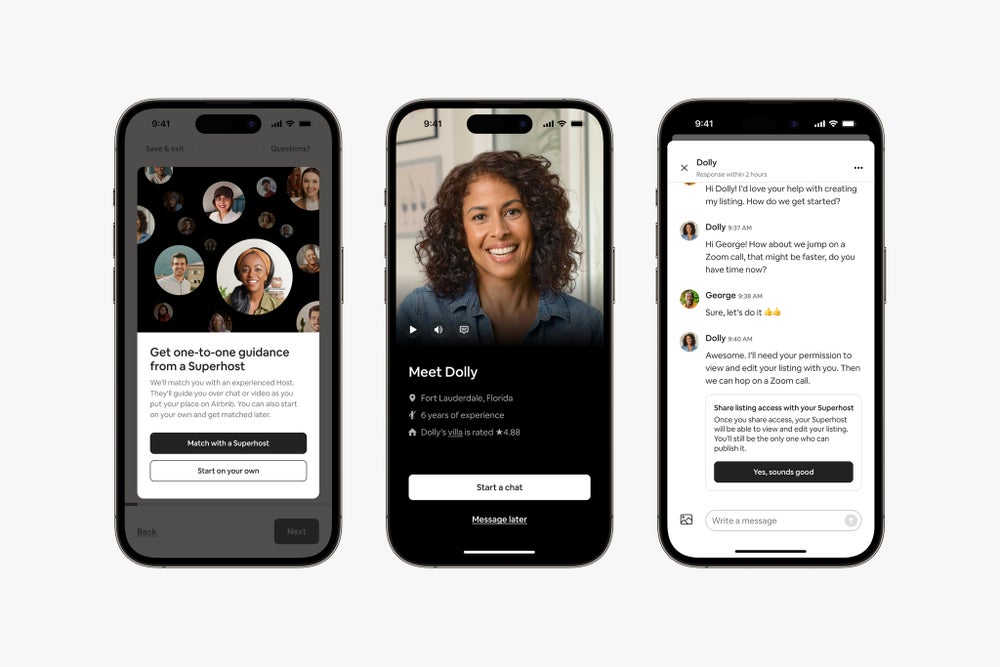 The idea is that this will help the average person host, Chesky says. That presents a possible alternative to creating, for example, Airbnb towns from Joshua Tree to Amsterdam.

Airbnb is verifying all guests, making changes to AirCover

Airbnb will also begin to verify every single person on the platform worldwide starting Spring 2023, the company said. Chesky said that over 100 million people on the platform are already through its process, which involves checking a person’s government ID.

The company has also boosted its damage protection for its host insurance, AirCover for hosts, from $1 million to $3 million, and added additional protection for things like boats or art.

Airbnb will also roll out its party-prevention tech worldwide. This comes after years of host complaints about partying or loud noises, one party that sparked a million-dollar lawsuit, and the company’s recent crackdown on festivities in its rentals.

The company said it tested the technology, which can predict whether a guest is booking to host a bash.

“If somebody’s under say 25, they don’t have a lot of history in Airbnb, they want to book a one-night reservation in the same city last minute, and they book a really big house — that looks really suspicious,” Chesky said.