Equals, a New York-based startup ambitiously aiming to challenge Excel’s dominance with a supercharged spreadsheet, today announced that it raised $16 million in a Series A funding round led by Andreessen Horowitz (a16z), with participation from Craft Ventures, Box Group, Worklife and Combine. Co-founded by Ben McRedmond and Bobby Pinero, two former Intercom employees, Equals claims its spreadsheet is one of the few with built-in connections to databases, versioning and collaboration features.

Equals isn’t the first startup on a mission to kill the traditional spreadsheet. There’s Airtable, of course, plus upstarts like Spreadsheet.com, Actiondesk and Pigment — the last of which raised $73 million last November for its data analytics and visualization service. But Pinero, Equal’s CEO, claims that Equals is unique in that it doesn’t so much replace the spreadsheet as incorporate additional tools, like live data integrations.

“Equals comes from a really simple and obvious insight: that the spreadsheet is the best way to do analysis,” Pinero told TechCrunch in an email interview. “Excel was built nearly 40 years ago. Google Sheets 16 years ago. The way companies work today is meaningfully different. Our data is way more accessible. We should automate much of the painful, manual work of getting data into a spreadsheet. And we’ve learned so much about how teams better collaborate over the past decade. A spreadsheet should incorporate those learnings. That’s Equals.”

Customers can tap Equals to build analyzes with real-time data directly from a database or data warehouse, with or without using sequel query language. It supports standard formulas and offers templates for common use cases, like tracking recurring revenue and measuring user engagement. 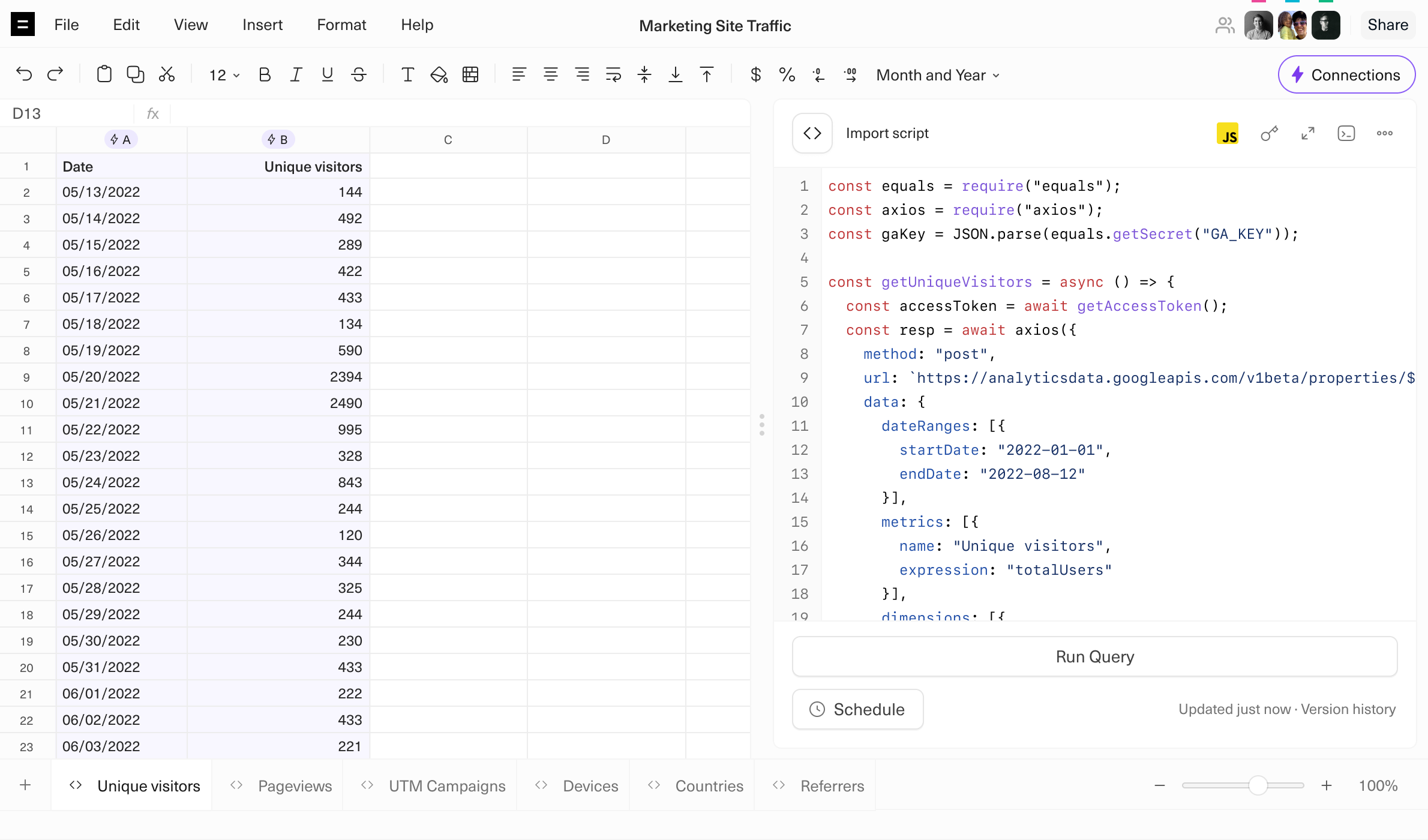 Soon, Equals will be able to import scripts to allow users to connect spreadsheets to different APIs and internal tools with JavaScript or Python. Also on the way are pivot tables and connectors to business intelligence apps from Salesforce, QuickBooks, Stripe and Google Analytics.

“Equals represents a massive opportunity to get business stakeholders — typically folks who are neglected from being able to get their own data — access to data. To be able to work with data in a tool they’re comfortable and already know how to use: a spreadsheet,” Pinero said. “No more manual spreadsheets that take hours to manually update across the team. No more dumping data from BI tools into spreadsheets to then do analysis.”

That’s a lot to promise, but Pinero is well aware of the hurdles ahead. He doesn’t expect 10-employee Equals to be profitable for a while — the Series A proceeds will go mostly toward R&D, he says; Equals has raised $23 million to date — and the platform will remain gated behind a waitlist pending the next major product release. Pinero claims that “thousands” of people have signed up so far.

“It speaks to the excitement and traction with Equals that in this market we’ve been able to raise a significant series A. At our current burn, we have eight-plus years of runway,” Pinero said. “We’re very well positioned to outlast this downturn, however long it may go. As the saying goes, generational companies are built during these downturns, and we plan on making Equals one of those.”