Why do some people struggle to make friends while others have no trouble at all?

David Morin, now the founder of startup SocialSelf, wanted an answer to that question — but nobody seemed to have one.

Morin wanted to crack the code, so he launched a company that offers an automated solution for the “loneliness pandemic.” Today, SocialSelf boasts one million monthly users.

entrepreneur sat down with Morin to learn more about SocialSelf’s evolution, “social overthinkers” and how being uncomfortable can be a good thing.

Related: How to Become a Master at Talking to Strangers

An automated solution for the ‘loneliness pandemic’

Before Morin began SocialSelf, he was already well-versed in entrepreneurship. At 17, he co-founded an electronics company, which he sold as a multimillion-dollar entity. Then he started another company to sell advertising space on websites.

But an encounter with Robin Sharma’s book The Monk Who Sold His Ferrariwhich contends that happiness is found through helping others, changed Morin’s perspective.

Morin started to consider what made him truly happy. Ultimately, he landed on something simple: Having everyday experiences with friends.

“If you have good friends, you can go through any struggle in life,” Morin says. “But if you have everything else in life and you still feel lonely, it’s like nothing is worth it.”

But he also recognized that forging meaningful relationships is difficult for some people — and he wanted to help them.

Morin launched SocialSelf in 2012 as a simple blog with a focus on social psychology. But the site garnered a larger audience during the Covid-19 pandemic.

Now, SocialSelf offers content authored by counselors and therapists, free training to help people build their social confidence and paid courses for those who want to go more in-depth.

Related: Welcome to the Age of FOMU (Fear of Meeting Up)

In his research to build out SocialSelf’s courses, Morin spoke to at least 10 people for each one, working out to 20-30 hours of phone calls.

Undertaking this “hardcore version of customer development” was essential, Morin says, as he needed to have a deeper understanding of various socialization issues — or risk providing overly general advice that could be ineffective or even detrimental to SocialSelf members.

Consider the example of someone who struggles to connect with others in a social setting. The root of the problem could be social anxiety, but it could also just as easily be a lack of empathy. Naturally, telling someone with social anxiety to develop empathy is counterproductive.

“If you read the advice online to ask more questions because people like to talk about themselves, that sounds like a good piece of advice,” Morin explains. “But then when we interviewed our members, it turns out that many of them feel like they aren’t really interesting, so they never talk about themselves. And then they read that piece of advice and think, Oh, I need to ask even more questions. And then they still don’t connect.”

When users navigate to SocialSelf, they have the option to take a brief survey. Based on those results, users are assigned tags in the SocialSelf system, which then customizes their next steps through automation.

SocialSelf’s courses aren’t a replacement for therapy, Morin notes, but they can still provide value to a lot of people — without the equivalent price tag.

“If you [go to] a therapist, they ask you quite simple questions at first to try to figure out how to help you,” Morin says. “And, if it’s a [cognitive behavior] therapist, they use proven methods that are based on what your situation is and what your goals are. And that’s actually not that hard to do in an automated shape.”

Related: 4 Important Social Skills You Need to Succeed at Work 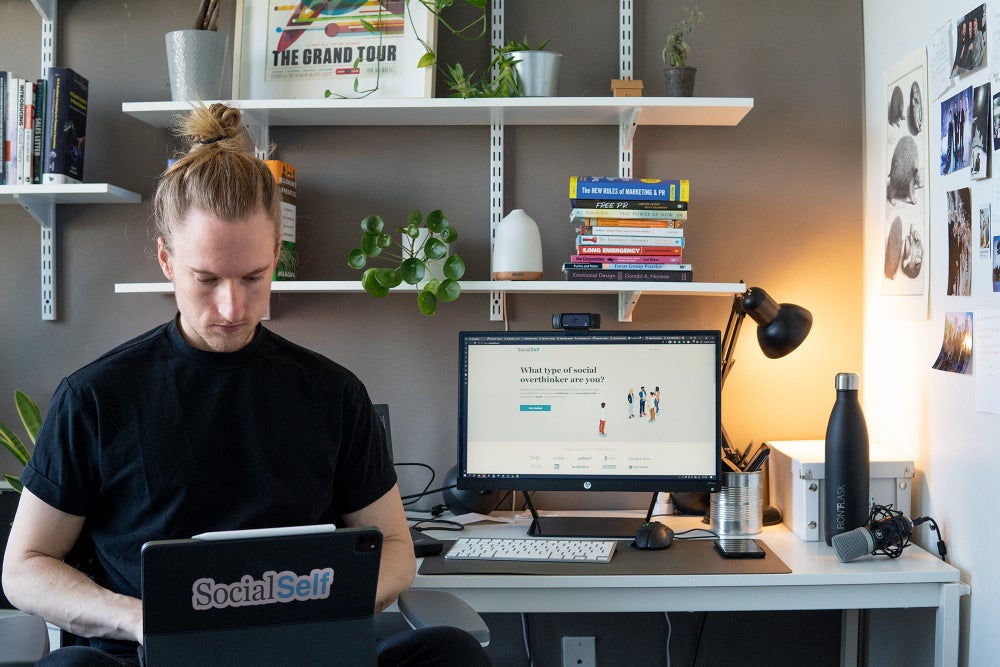 What is a “social overthinker”?

It was an idea that resonated with people who saw others socialize in a seemingly careless, easy way — while they were trapped in a cycle of overthinking that made those same kinds of interactions difficult.

“Often, these people are quite well-off and smart,” Morin says of social overthinkers. “They have good jobs and everything, but when it comes to socializing, they get nervous because they put pressure on themselves, and they complicate things in their heads.”

But there’s some good news for social overthinkers too: People tend to think they come across as more awkward or nervous than they actually do.

Morin cites the example of people who give speeches and believe they appear more anxious than their audience does — empirical research backs that finding.

But so does the common experience many people have had: They return to their seat after giving a presentation and lament how nervous they were, only to be told that they didn’t look nervous at all.

Related: 10 Tips to Beat Your Fear of Public Speaking

Socializing isn’t easy — and some things make it even harder

Many people believe socializing should be easy because we’ve been doing it since childhood, but it’s an incredibly complex process, Morin says.

Covid-19 added another layer of difficulty: A report from the Harvard Graduate School of Education found that 36% of all Americans, including 61% of young adults and 51% of mothers with young children, feel “serious loneliness” in the wake of the pandemic.

Yet at the same time, Covid’s socialization restrictions were a relief for people who suffer from social anxiety, Morin says. It became normal not to socialize, which, in turn, only exacerbated those underlying issues.

“When you socialize less, it just gets harder because if you socialize over chat, for example, there are so many thousands of nuances that you don’t pick up on and that you aren’t getting used to,” Morin explains.

That’s why some social overthinkers are finding the return to school or work — and the social interactions that come with that — more difficult than ever before.

Social media is another complicating factor, Morin says. He likens it to eating candy: It fills you up to an extent — you’re not really satisfied, but you lack the incentive to go to the kitchen and prepare a real meal.

“There seems to be some type of mechanism where people use social media, and because of that, they aren’t motivated enough to go and actually socialize in real life,” Morin explains.

Related: How the Health Crisis Will Change Socializing in Business Settings

Some people who have social anxiety when they’re young grow out of it with time, Morin says, while others move in the opposite direction — becoming less socially savvy over the years.

What makes the difference? Whether or not someone is putting themselves in situations that require those socialization skills, Morin says. Essentially, only those people who get comfortable with being uncomfortable will be able to find a more natural social footing.

But that doesn’t just mean showing up to the party you don’t want to go to — you have to engage in the behaviors that create the discomfort, Morin explains. Spending the whole time on your phone or helping wash the dishes won’t stretch those socialization muscles.

“If it’s uncomfortable to keep a conversation going a little bit extra, and you’d rather just cut it short because you’re afraid that there’s going to be an awkward silence if you push yourself to make conversation for a few more minutes, that’s what turns out to be helpful,” Morin says.

And that’s exactly what Morin wants to do — keep helping people enrich their lives through socialization. He hopes to turn SocialSelf’s one million users into 10 million one day.

“I want to continue to scale this,” Morin says, “so that it can maybe make a little bit of a difference in society as a whole, [help] people feel more confident and able to better bond with other people.”