A new activity-tracking platform is launching out of stealth today with $1 million in pre-seed funding, with a view toward helping those suffering from Long COVID track and manage their symptoms.

Visible, as the company is called, is the brainchild of Harry Leeming, a London-based engineer who says he has suffered from Long COVID for the past two years, and Luke Martin-Fuller.

The global pandemic’s end may be within eyeshot for many, but millions of people globally still suffer long-term effects from COVID-19, with studies suggesting that anywhere between 20% and 40% of those who have contracted COVID-19 experience ongoing symptoms such as mild fatigue, ‘brain fog,’ headaches, sickness, weakness and respiratory problems.

The World Health Organization (WHO) estimates that “at least” 17 million people in Europe alone experienced Long COVID in the first two years of the pandemic, a figure that rises to as high as 145 million globally. But with much of the healthcare realm still trying to piece together the Long COVID puzzle, Visible is going to market to help sufferers address what is widely considered to be the number one Long COVID symptom. Post-exertional malaise (PEM) describes the worsening of a condition’s symptoms following even minor physical exertion, and it’s also common in ME / Chronic Fatigue Syndrome (CFS).

One way to counter the effects of PEM is to adopt a “pacing” strategy, which involves performing a delicate balancing act between rest and activity. Through a consumer wearable and smartphone app, Visible wants to help millions of people do just that, and it’s launching the first part of its product in open beta today.

In its initial guise, Visible is available as a free mobile app, with plans to introduce a premium subscription in the US and UK in the coming months. This will include a Polar Verity Sense heart-rate monitor (HRM), designed to be worn on the upper arm to capture the necessary data passively throughout the day.

For now, though, Visible works entirely through manual data inputs via morning and evening check-ins. This includes measuring heart-rate variability (HRV) — the time in between each heartbeat — which can be an indicator of a person’s health and wellbeing. So how can Visible track this when it’s not actively supporting a hear-rate monitor yet? Well smartphone cameras can help via a technique called photoplethysmography (PPG), which has been shown to be a somewhat effective alternative to ECG in terms of analyzing HRV in humans.

Essentially, Visible uses PPG to detect small changes in a person’s skin color, with the user placing their finger over the lens of their camera for a sixty second period each morning.

“These changes allow us to measure the time between heartbeats and calculate heart rate and heart rate variability,” Leeming explained to TechCrunch. 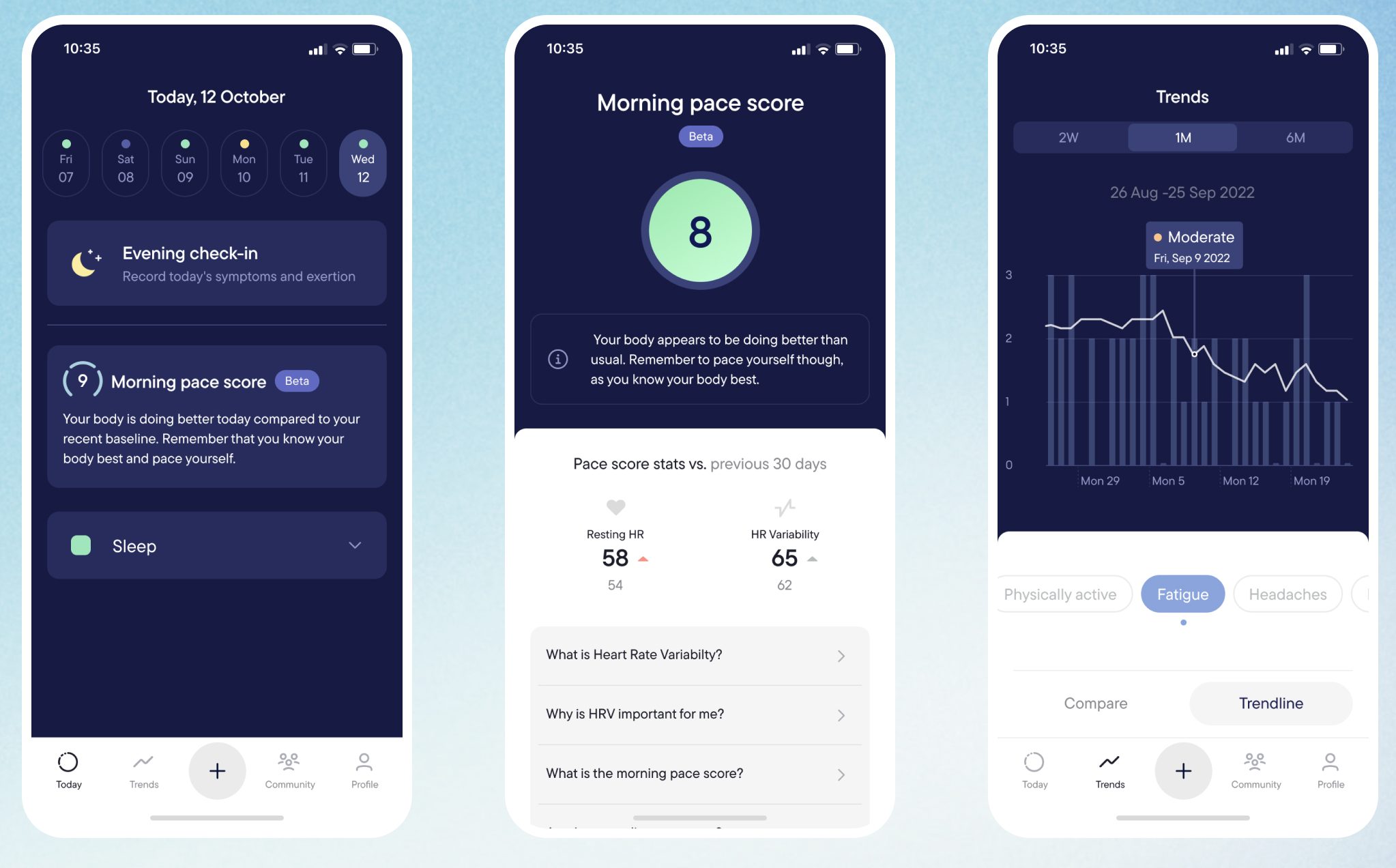 With continuous tracking via a physical HRM, however, Visible promises to be far more effective in terms of helping users adopt an effective pacing strategy, ensure that they don’t over-exert themselves, and allow their bodies more time to recover.

This will include real-time data and notifications when it detects that the user is doing too much activity which can make their existing symptoms worse and curtail recovery.

“This approach is consistent with published research which shows that alerts of this kind can improve functional outcomes for people living with post-viral illness,” Leeming said. “This works because post-viral illness leads to a compromised aerobic energy system. By keeping your activity levels below a certain threshold, you can avoid a broken energy metabolism response which leads to exacerbated symptoms.” 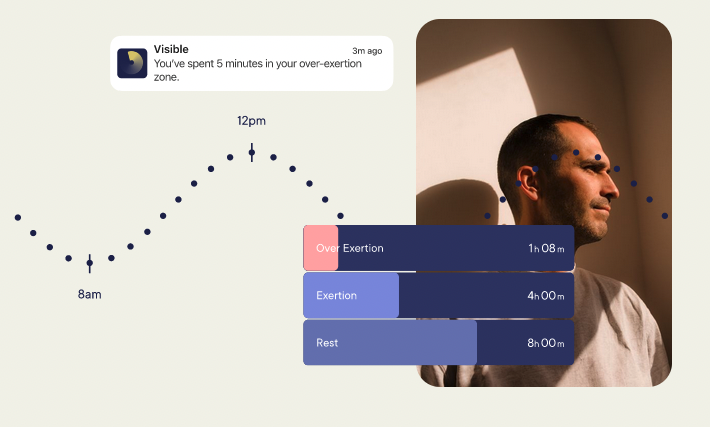 Visible Plus subscription provides users with insights and prompts

Using data garnered passively from a wearable allows Visible to generate illness-specific metrics, or digital biomarkers as they’re known, which allows people to make decisions based on “hard numbers” rather than subjective estimates of the severity of their condition.

For example, those who pay for a Visible Plus subscription and use the accompanying wearable will benefit from accelerometer and gyroscope data from the Polar Verity Sense. This allows Visible to determine things like “orthostatic intolerance,” or the body’s biological response from moving into an upright position from lying down. This can show the impact that changing one’s posture has on a change in heart rate.

In terms of pricing, this has yet to be finalized, but Leeming said that it will be in the rough ballpark of other consumer subscription services a la Netflix or Spotify. So we’re probably talking in the region of around $10 per month, give or take. If someone already has their own Polar Verity Sense bracelet, Visible says it will offer the subscription at a discount rate, and there could be scope to extend support to devices from other manufacturers.

“We anticipate that we will support a wider range of wearable devices in future,” Leeming said.

Visible isn’t alone in trying to expedite Long COVID treatments and research, as we’ve seen a number of new ventures arrive on the scene over the past couple of years. One of those is a non-profit startup called the Long Covid Research Initiative (LCRI) which recently launched with $15 million in funding from Ethereum co-creator Vitalik Buterin to study and develop treatments for Long COVID. The LCRI was kickstarted by a Googler and Long COVID sufferer who decided to take things into his own hands after becoming frustrated at the lack of urgency in many of the government-led programs. And there are clear comparisons with Visible’s path to launch today.

“Long COVID has turned my life upside down — millions, like me, have still not recovered from COVID and are struggling every day,” Leeming said. “There is no clear diagnosis, no pharmaceutical treatment, and little recognition from the government as to how widespread and how life-changing these conditions are. Patients like myself have little option but to build the disease management tools that are badly needed – tools specifically designed for people living with Long COVID, but also those with similarly dismissed chronic conditions like ME/CFS, Chronic Lyme and Fibromyalgia.”

It’s also worth noting here that Visible users can opt in to contribute their symptom and biometric data to third-party researchers studying Long COVID. By way of example, Leeming said that it has a research partnership in place with Imperial College London, and it’s working with a team of academics who are currently researching the impact of the menstrual cycle on Long COVID symptoms. Visible also has an advisory board of specialists in post-viral conditions, including Dr. David Putrino who is director of rehabilitation innovation at Mount Sinai, and Dr. David Strain, medical advisor at ActionForME, UK

“Long Covid and ME/CFS are incredibly debilitating and widespread diseases that we urgently need to better understand, and help patients to manage,” Strain said in a statement issued to TechCrunch. “Visible is the first tool to really help patients to measure and manage their own disease using only their smartphone. Just as importantly, it will be instrumental in helping clinicians and researchers advance our knowledge of the diseases too.”

Visible’s pre-seed round of funding was co-led by Octopus Ventures, Calm/Storm and Hustle Fund, with participation from a number of angel backers.

Leeming said that more than 4,500 people were on the waitlist for the Visible app, a number it hopes will increase now that it’s officially available on Android and iOS.